Is your Data Reliable? – Lessons from Popeye the sailorman

For decades Popeye has been the favorite cartoon for children around the world. Over the years, Popeye has appeared in comic books, television cartoons, arcade and video games. In 2002, TV Guide ranked Popeye #20 on its “50 Greatest Cartoon Characters of All Time” list.

Popeye, with his odd accent and improbable forearms, used spinach to great effect. But why did he eat so much spinach? And what was the reason for his obsession with it?

In all his cartoons, the sailor is invariably put into what seems like a hopeless situation, upon which, he pops open a can of spinach and gulps the entire contents into his mouth. Upon swallowing the spinach, he turns superhuman and saves the day (and very often rescues his girlfriend Olive Oyl from a dire situation).

The question now is, how did he turn superhuman?

The story of spinach’s phenomenal strength can be traced back to more than a hundred years ago. Back in 1870, Erich von Wolf, a German chemist, examined the amount of iron within spinach, among many other green vegetables. In recording his findings, Wolf accidentally misplaced a decimal point when transcribing data from his notebook, changing the iron content in spinach by an order of magnitude. While there is actually only 3.5 mg of iron in a 100-gram serving of spinach, the accepted fact became 35 mg.

It turns out that spinach really does not deliver the amount of iron that my mother always believed would make it worth us eating this horrible food.

Once this incorrect number was printed, spinach’s nutritional value became legendary. Such was the widespread acceptance of this mistruth that the creators of Popeye had the idea that Popeye should eat spinach to increase his strength.

This error was eventually corrected in 1937, when someone rechecked the numbers. But the damage had been done.  Apparently, it is estimated that Popeye helped increase American consumption of spinach by a whopping 33%!

The message here is how misleading can bad experimental data be. Also, the first thing we should focus on is avoidance of confirmation bias – hearing what we want to hear. Ultimately, the reason these errors spread is because it’s a lot easier to spread the first thing you find, or the fact that sounds correct, than to delve deeply in search of the correct fact.

It can be tough to remember to double-check data when you’re first entering it, but just taking a few extra seconds to verify your information can save you lots of time in the long run. Data capture can be unreliable whether it is automatic or manual, so data still has to be checked to make sure it is accurate and complete. High quality data is the cradle for the success of any business. 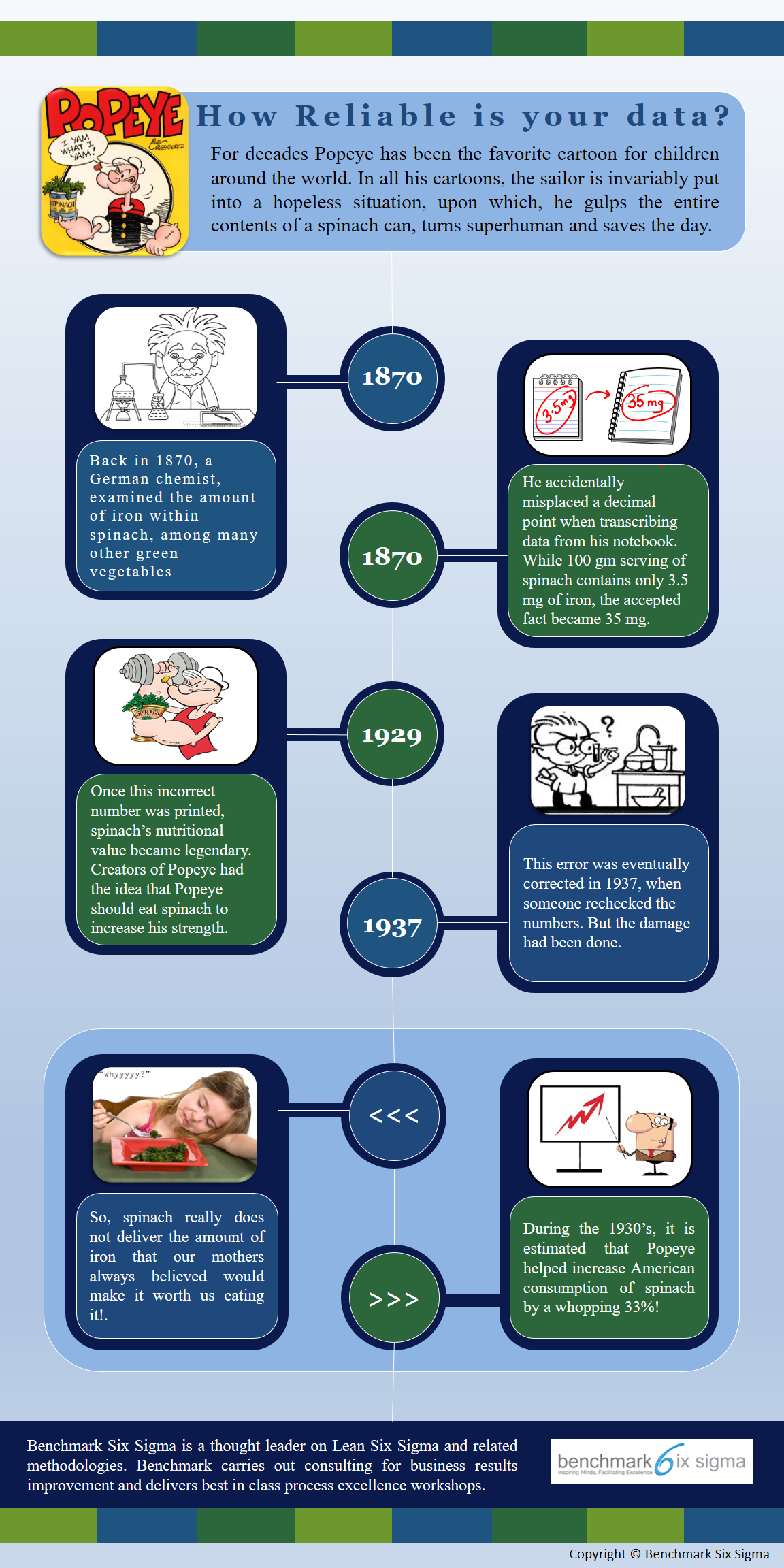 Reference: Arbesman, S. (2012). The half-life of facts: Why everything we know has an expiration date.

– Dorion Sagan, Cosmic Apprentice: Dispatches from the Edges of Science

We’ve all experienced the sting of the typos and poor quality data. Luckily, for most of us, our typos don’t wind up changing the world history, but I am sure you have your personal experiences to share with everyone.

Parag Mehta
Lean Six Sigma Consultant at Benchmark Six Sigma
Parag is a Lean Six Sigma Consultant and Trainer at Benchmark Sig Sigma. He has a blend of experience in the application of six sigma tools to Manufacturing, Research & development, Quality control and Technical services. He loves to use real life stories for explaining various techniques and concepts in his trainings. He has special interest in Design of Experiments, Problem Solving, Process improvement, Data analysis tools and Capability building. In addition to his expertise on statistical methodology, Parag has done extensive work in the application of the same in Pharmaceutical and Healthcare area.

Benchmark Six Sigma conducts workshops related to problem solving and decision making all across India and partners with a limited number of companies each year on "build your transformation team" projects. Public Workshops calendar can be seen here - https://www.benchmarksixsigma.com/calendar