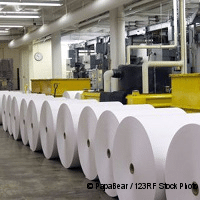 The senior management of a paper company decided to implement design of experiments (DOE), a Six Sigma project, to unleash the mathematical relationships among all the variables.

The lack of standardization in the measurement system of the company contributed too much noise to the true equipment response. Also, the management team was unwilling to incur the capacity and yield losses that generally occur during the execution of a DOE.In place of deriving the mathematical process model resulting from DOE, for Six Sigma project the company used a number of other Six Sigma tools to make significant improvements to the yield of the process, with lower costs and in less time.

The production and engineering teams were aware that the control system was being constrained because operators continued to make set point adjustments based on conventional knowledge instead of using the control system for stabilizing the process.

As a part of six sigma project, the primary step in designing the measurement system analysis was to get the customer’s voice. The current practice measured the quality of the product both inline and manually at the exit of the first piece of production equipment.

The second step was to standardize the measurement system analysis.

In the third step, an input variable in the process was not calculated electronically. A standard method for calculating that input variable was instituted along with a specified frequency for manual collection.

The fourth step was to ensure that all vital product features were recorded. This would help in balanced sub-grouping of relationships. The production activity records helps in collection of the data.

The last step was significant in lessening instrument measurement variation.With the designing of new measurement system analysis and collection of new data, other improvement activities were worked on based on qualitative experience and conventional process knowledge.

There were three sources of data:

1) the inline process measurements that were stored electronically,

3) the historical records of production.

The excel macros’ efficiency was significant to lessen the lead-time between the observation and analysis phases of the project. Towards the end of the observation period, the final data set was put together and Excel and Minitab were brought in use to sort and filter the data into rational subgroups for hypothesis testing.

The visual representation of data, statistical format greatly affected in changing the culture of process control from an art of subjectively applying tribal knowledge to an objective, scientific approach with the application of statistical tools.

While performing the statistical analysis, regression attempts showed that special cause variation in the day-to-day operations were extremely important.