Is Lean a Waste Elimination Program or Striving for Excellence? 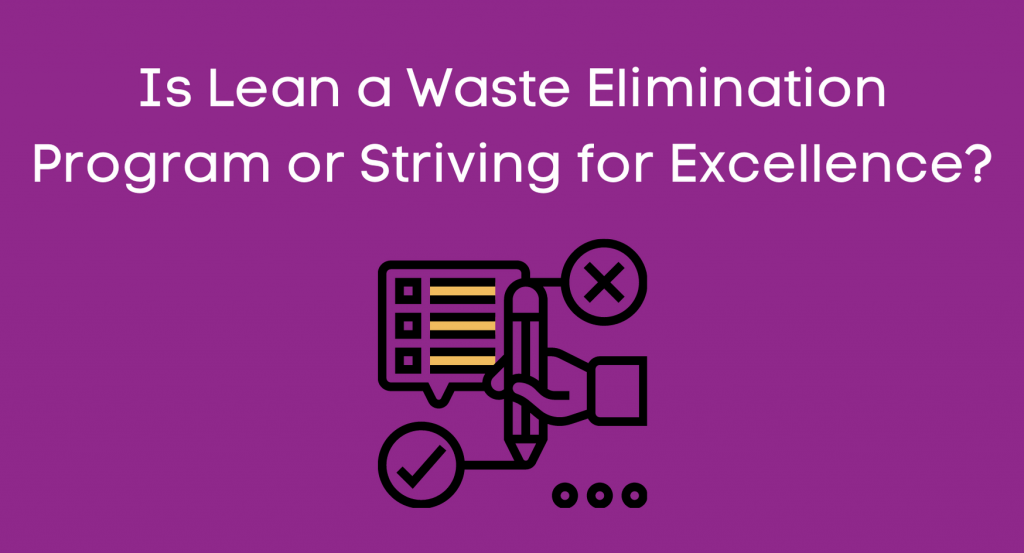 Focusing on current issues depletes our resources, while creating a bright future vision to aim for generates positive energy for improvement. Many approaches to organisational growth, which involve three dimensions, have been built on this foundation:

Lean thinking is undergoing a metamorphosis that is based on that fundamental insight. Toyota is the original lean model, and many interpretations (and misinterpretations) of what Toyota does to be outstanding have been made. Mike Rother, the author of Toyota Kata, takes a different approach to waste elimination than many lean systems. In reality, it is similar to work on lean leadership, but it goes a step further in defining a technique that can be learned in stages.

The observation that chasing waste is a losing proposition is the starting point. Waste appears as soon as one can kill it, just like a game of Whack-A-Mole. Consider what waste entails: operations overproducing because they are not directly related to their customers, excess inventory because they are not producing at the rate demanded by customers, rework because work is not done correctly the first time, people waiting because materials, details, or machines are unavailable, extra motion because structured work is incomplete, obsolete, or wrong, and so on.

The lack of underlying process control in operations that are not running at a high degree of lean usually contributes to these issues.  Trying to eradicate waste in today’s system and society is like finding and combating problems— it’s exhausting and futile. What does it mean to work for an optimistic vision? It seems to be a vision, a clearly identified task around which people mobilise, and then targeted improvement to move against simple, measurable goals. The components are similar to those used in desired featuring: What is the goal condition (also known as the “target condition”)?

The improvement kata adds a deliberate method of exploration and a framework for learning the process of improving, which is often absent from process improvement initiatives focused on visions and action plans. In the martial arts, the word kata refers to a pattern that can be practised until it becomes second nature. The improvement kata breaks down a method into simple steps that are replicated with a coach in order to achieve the desired result. In this way, it employs the most well-known techniques for improving any complex ability, whether in the arts, music, sports, or science.

Regardless of the severity of the problem (whole system or individual process), the sector, or the company’s unique approach, the steps of the improvement kata are often the same. If sales is a concern, this can be a priority. Define a quality strategy if quality is a problem. If long lead times are causing a problem with customer responsiveness, this can be a priority. It refers to goods that are mass-produced and engineered to order as one-offs. Even though the issues solved will differ greatly, the improvement mechanism is still the same.

The improvement kata’s pattern is well-defined, and it follows a scientific procedure that has worked for thousands of years, but merely comprehending the steps is insufficient. The real challenge is to replace people’s old habits of focusing on today’s issues, rapid resolution, and little learning with a collection of skilled routines that allow them to systematically advance against specific goals. Managers, subordinates, and team members must learn this. Experts can teach, but regular coaching and change must take place as part of the daily routine within the existing management hierarchy. This way, aiming for perfection will take the place of random waste hunts.