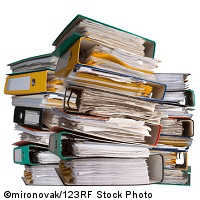 In the course of process enhancement for an Ohio based healthcare system, it was found that there were frequent complaints raised by the SSC (shared services center) employees and supervisory staffs about the daily production quota that was formulated to address the high volume of purchase order (PO) invoices.

Evaluation of the actual database revealed the need to pull out the necessary data to make it easily available.

Next in the Six Sigma project was the raw data analysis using the Anderson –Darling statistical tool, showed that the existing data was not following a normal distribution. Moods median Test was selected to deal with the wide variance in the processing time that ranged anywhere from 3-3,875 seconds.

Now, the 4th quarter raw data showed that 98% of the total number of PO invoices involved just the first ten invoice groups. Six Sigma helped suggest the Minitabs bootstrap macro to provide an upper and lower bound on a smaller sample size data. The same statistical tool was used on each of the 10 invoice groups, after which a standard time range for processing them was calculated.

For drawing the Time Analysis Report, the contents needed to be laid down. Additionally it was also essential that the user of the report assign a date range and then either run the report or export the raw data into Microsoft Excel. For this, after much discussion, the Command Menu Page was built using SQL and VBA. And, once the Time Analysis Report was constructed links were established between it and the Command Menu Page.

A pilot test was run, to observe the behavior of the employees. Those who met or exceeded the results were also ready to share the idea, whereas those who could not meet the expected results were apprehensive.