5 “Process Ghouls” that go bump in the night 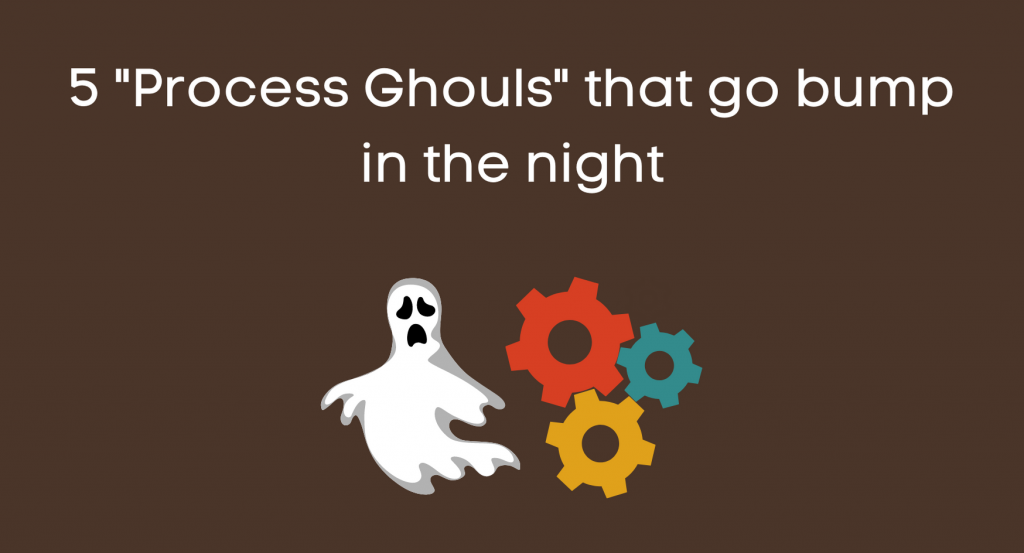 This vile creature is easily recognised by its proclivity to extend whatever is placed in front of it. Tasks that continue to increase in size and expense, as well as a propensity to solve several issues at once, are all signs of the scope creeper overgrowth. This ghoul’s other known cure is neutralisation through predetermined parameters of what is in the scope and what is not.

Identifying a phantom process owner is challenging. These animals are impenetrable and quiet, and the only way to detect their existence is to examine the problems they appear to cause. Constant uncertainty about liability and constantly passing consumers from one organization to another are two of the adverse effects of a ghost process owner haunting. The only documented method of expelling a phantom system administrator is by evidence (which may help to make parts of the ghost noticeable) and a ceremonial repositioning of roles and obligations for most of those harmed by the phantom.

Ghoul Process 3: The Which Witch:

The Which Witch can be identified by its proclivity for lurching through one objective to the next and its unwillingness to prioritise. A Which Witch threatening can occur as a consequence of high workload and anger in those who are affected. A collection of programmes and initiatives that are never completed is another side effect of a vexing Which Witch. Witches are extremely hard to get rid of, although with the right management, they can be managed.

Because of their composition powers, dreadful demons are fascinating creatures to research. Because of their extraordinary capacity to put out flames from any disaster by mobilising the energy of others, these mischievous creatures are often honoured as legends and showered with accolades within organizations. For example, to reach a tight deadline, they’ll have their workers work on weekends. Devastating Devils are harmful because, despite appearing to be superheroes, they are the ones who started the fire in the first place caused by a combination of bad management and miscommunication. Staff exhaustion and unnecessarily high levels of tension are two side effects of getting catastrophic demons in your company. Most companies have destructive ghosts, and the treatment strategy should involve containing them by putting a stronger focus on encouraging preventative action. There is, still, no proven remedy.

The Zany Zombie is unique except that it is basically well-intentioned, but somehow it ultimately ended up producing bizarre results that are bad for business. Unexpected effects, such as when the objectives of various departments within an organisation come into conflict, may be used to identify the existence of a Zany Zombie. In a call centre, for example, a goal about call sample rate can lead in a client having to call several times to get the response they need. As a consequence, the customer is frustrated, and workers must handle further calls. The best way of dealing with Zany Zombies is to completely eliminate them by continuously being on the lookout for them.